ALL KOMMANDANT PRODUCTS IN STOCK NOW!

Dark Horizon Records are proud to announce we are now an official distributor for the apolitical Chicago based band, KOMMANDANT. Their militant image and philosophical themes have created some controversy in the so called "Metal Community". Regardless, DHR stands fully behind the band and courageously asks you to use your mind, listen and support KOMMANDANT their message and the "Freedom" they possess to portray their music using any topic and imagery they choose to do so with. Above and beyond the imagery, the music of this band cuts through the static of the weak, limp-wristed cancel culture of today's so called "Scene" with their brilliant releases full of depth and complexity! Support these true warriors of underground metal! Use your intellect and realize... "We In Fact Are The Enemy"!

The collective consciousness of the average American is weary. After more than a decade fighting a multi-fronted war against a vague, borderless enemy, there has been a noticeable shift in the way that Americans perceive themselves and the rest of the world. The party attitude of 80’s hair metal is long gone. The shock value of the pseudo-Satanic bands from the 90’s has lost its edge. In this era of warrantless wiretapping, no-fly lists, secret prisons, and so-called “free speech zones” within the United States, a new attitude is emerging. Whether this new outlook is the result of our new culture of extreme government or merely in spite of it is hard to say. Is it possible to make a bold statement about it while maintaining a wholly apolitical stance in this, the decade of division?

Kommandant, an extreme metal band hailing from Chicago, are the pioneers of this new phenomenon. Their sound is drawing notice in and of itself: many of their reviewers have written that they are one of the most notable up-and-coming bands to come out of the U.S. black metal scene. Kommandant have staunchly refused to thus far publish any lyrics, preferring the listener take away what they put into it. Not surprisingly, this leaves fans and reviewers snapping up any information or insight that the band puts out, hoping to gain some sort of knowledge about what is really going on. Every article that has been written, every review that has been proffered wonders what is going to come from them next, the sense that this is the cusp of something big.

What truly sets them apart is their aesthetic. At first blush some may see gas masks and combat boots and write it off as a gimmick — or worse yet, assume that they are a National Socialist band. Those people would be wrong. Beyond the gas masks, beyond the button-down black shirts and the vaguely fascist aesthetic is a larger picture: this is not a band that is paying homage to any regime of the past or a specific time period, no – Kommandant is art imitating life.

Americans are for the first time starting to feel like their country is not the shining jewel of democracy, peace and prosperity the way that their parents and grandparents had been raised to believe. Kommandant are a direct reflection of this. In a genre that has long viewed itself as counter-culture, this is perhaps the first time that extreme metal has embraced this concept.

Perhaps this is why their look is so seductively taboo – it is slightly uncomfortable, yet strangely alluring. People are instinctively drawn to powerful figures. This is perhaps the first time that extreme metal has embraced the concept of “we have met the enemy, and he is us”. 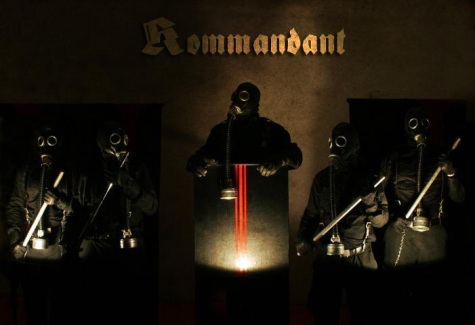 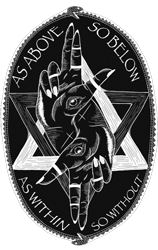